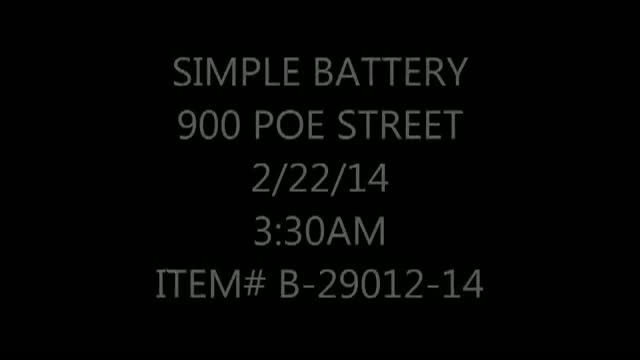 Published on Feb 27, 2014 On Saturday, February 22, 2014, at or about 3:30am, the victim was walking to his vehicle in the 900 block of Poe Street. A 90's model red Jeep SUV passed him, turned its lights off and them followed him down the street. Three subjects exited the vehicle and chased the victim. One of the subjects struck the victim in the back of the head. The victim kept running until the perpetrators gave up. The victim stated that the perpetrators made no demands. The victim was not sure if he was struck with a fist or an object. The victim sought medical attention for a small laceration to the back of his head and was released from the hospital. Detectives obtained surveillance video. The video shows 3 black males exiting the vehicle and chasing the victim. A fourth subject can be seen sitting in the back seat of the vehicle. The vehicle appeared to be a 90's model Jeep Cherokee with a temporary license plate. Perpetrator #1 was described as a black male in his 20's with short hair wearing dark clothing. He was said to be approximately 6'00"-6'02" tall and weighing approximately 215lbs. Perpetrator #2 had a similar description as perpetrator #1. Perpetrator #3 appeared to be a black male in his 20's with long braids and a stocky build. A fourth perpetrator that remained in the vehicle may have been a black female. Anyone with information regarding this incident can contact Det. Michael Flores at (504)658-6707/MFlores@nola.gov and/or CrimeStoppers at (504)822-1111.
Address:900 block of Poe Street
Added: Mar 23, 2014
Views:7411